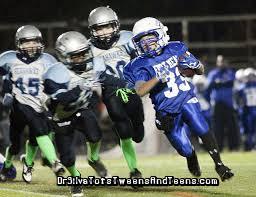 In the July 7, 2014 issue of People magazine, there was an article called, “6-Year-Old Football Players, Too Young to Tackle?” The article discusses the Tri-County Titans, a competitive tackle football team in the Texas Youth Football Association.  What makes the Tri-County Titans so unique? They are a team comprised of 6 year olds.  They were highlighted on Friday Night Tykes, a TV show on Esquire Network.  There’s been a lot of controversy regarding these elementary kids playing football.  So what’s wrong with 6 year olds playing football?  Nothing, except, these young kids are playing tackle football.  While the article discusses the potentially negative impact of competitive football among elementary school kids, I would like to focus on an important issue, concussions in football and children.

Concussions have come to public attention in recent years due to all of the attention received by concussions in the NFL.  Many NFL players have lifelong effects from repeated concussions.  In 2013, there was a  “$765 million settlement over concussion-related brain injuries among its 18,000 retired players, agreeing to compensate victims, pay for medical exams and underwrite research.”   Repeated concussions can cause a degenerative brain disease called Chronic Traumatic Encephalopathy (CTE).  CTE can manifest as Alzheimer’s, dementia, and Amyotrophic Lateral Sclerosis (ALS), also known as Lou Gehrig’s Disease.  Measures are being taken in the medical and school communities to help prevent our children from getting concussions during all sports, not just football. Doctors, coaches, and parents are also more aware of concussion symptoms.

If your child suffers a sports related injury, make sure to go to his or her doctor.  Also, make sure your child receives an extra exam that clears him or her to return to their sport.  More importantly,even before a potential injury occurs, make sure you know the facts about concussions.  Make sure your children’s school and coaches know the facts as well.  The CDC has many concussion education resources available, such as “Concussion Fact Sheet for Teachers, Counselors, and School Professionals.”  They’ve even created an “Heads Up” app to help parents identify concussion or traumatic brain injury symptoms.  For more support and resources about concussions, concussion symptoms, and treatment, please refer to the  CDC concussion support website.