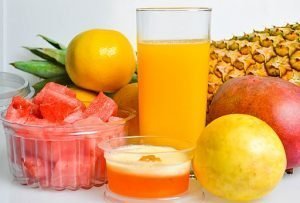 Juice recommendations & recommendations for other drinks for children have been updated by a health experts panel. Under the leadership of nutrition research organization Healthy Eating Research, this panel formed to update parents, caregivers and health care providers on what should be provided with drink-wise for a healthy start for children from birth through age five (5) years old. The panel consisted of experts from the Academy of Nutrition and Dietetics, the American Academy of Pediatrics, the American Academy of Pediatric Dentistry and the American Heart Association. They reviewed current domestic and international policy statements and evidence-based recommendations.

What About Soy Milk?

The panel did not recommend plant-based milk or non-dairy beverages for "exclusive consumption in place of dairy milk," unless there is a medical necessity.  Non-dairy milks are missing of important nutrients that are typically obtained from dairy milk.

Are juice recomendations the same as for fruit?  Fresh fruit is always preserved over 100% fruit juice.  Furthmore, parents and children need to be educated about the benefits of the fruit as compared with juice.  Fruit has natural dietary fiber and less sugar than juice.  Juice has lots of sugar which has a tendency to add to excessive weight gain.

Fruit recommendations are important.  While fresh fruit is best, it is not always practical, in that it doesn't work for everyone.  Fresh fruit is healthier, but it is more costly than canned or dried fruit.  In addition, fresh fruit also takes time to ripen.  Another thing to consider is that some young children have food texture issues that makes eating fresh fruit more difficult that eating softened canned fruit.  Reality is that fruit in any form is healthier and preferred over drinking juice.

What About Flavored Water and Flavored Drinks?

The panel did not recommend offering young children any caffeinated beverages, beverages with low-calorie sweeteners, sugar-sweetened beverages, toddler milk or flavored milk – such as strawberry or chocolate milk – at any stage during early childhood as part of a healthy diet. Personally, I do make one exception to the recommendation against flavored milk.  If your child has food issues, refusing  unflavored milk and other dairy (cheese, yogurt), then flavored milk an  acceptable alternative, so as to ensure your child has at least three calcium servings daily.

These sweetened drinks are the large daily source of added sugar for most children, resulting in excess calories and weight gain.

Other Times Not to Use Juice

In addition, unpasteurized juice products are not recommended for children as there is an increase of life threatening infections, such as E.coli O157 and O111, Salmonella, Cryptosporidium, norovirus, Vibrio cholerae, Clostridium botulinum, yeast, and hepatitis A.

Tooth decay is common when anything other than water is kept in sippy cups, if they use them throughout the day.  Constant exposure to non-water drinks leads to the carbohydrates in them to cause tooth decay, as well.  Children should have their teetch brushed twice daily.  And especially before bedtime.  After brushing their teeth, they should only have water before bedtime to protect their teeth.

Lastly, it important to know that if your child is dehydrated, then juice will make it worse.  Rehydration needs to be done without all the sugar in juice. Apple sauce is the only fruit product that is recommended depending on the cause of dehydration.

Today, the New England Journal of Medicine published the results of a study that showed there is no increased risk of serious heart problems in children and young adults who take medication to treat ADHD.

This study was a large retrospective study which reviewed the medical records from four health plans of 1.2 million children and young adults from ages 2 to 24 years old.  This study evaluated the frequency of sudden cardiac death, heart attack and stroke in those treated with ADHD medication versus those not treated with ADHD medication.  Those with a history of heart problems were not included in this study. The FDA sponosored this study, as they wanted more information regarding the potential side effect of sudden death that had been previously reported with ADHD medication.  Funding for this study was obtained by two agencies in the Department of Health and Human Services.
It is reasuring that there is no increased risk of ADHD medications associated with sudden cardiac death, heart attck, and stroke.  However, parents should still make informed decisions regarding their child's medications and their health with their child's doctors. And as with any chronic medication, ADHD medicaions should be monitored by their doctor.

If you you would like to learn more about ADHD, starting with an answer to the common question, "What is ADHD?, please go to http://bit.ly/um63SP.